All written pieces and graphics found on The Dispatch are intellectual properties of The Deranged Writer and associates unless stated otherwise.

In light of Deadpool 2. And probably a cosplay idea?

The Punisher (as seen on the Marvel Netflix show “Daredevil”). Badass. The logo on his bulletproof vest is a nice touch. 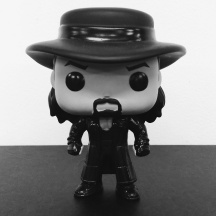 The Undertaker (WWE). Of course I can’t miss out on a miniature version of my childhood hero.

Sorry about the empty space. NO. It’s John Cena (WWE).

Batman, as seen on Batman: The Animated Series, my favorite animated show ever.

DC’s Earth One Batman. I love the paint job on this one.

One of the things I do in my free time is taking black and white photos (mostly) for my Instagram. And my regular subjects? My beloved Funko Pops! Here are some of what I took, and most of them are newly-bought (The Punisher and the two Batmen.

As you can tell, I have bought way too many Batmen. But nope. You’re wrong. There will never be enough Batmen.

Outfit noir
The last haul and last image post for 2016.

This sweet Funko shirt is also featured along all my other noir photos on my Instagram! Follow me there if you will!