#StarWars noir: Someday, I will have a full-on classic Stormtrooper helmet and suit. And this Pop reminds me of my wish.
#NewYearsDay noir: To all people on earth, have a fruitful and safer 2021 ahead! Happy new year! 🎆🎉🎊🤘💀🖤
#Birthday noir: "Remember, remember the Fifth of December." And for once I can truly say I'm feeling good on my birthday. Hell #YES.
#ProWrestling noir: From November 22, 1990 to November 22, 2020, The @Undertaker has cemented his legacy as the greatest character and big man in @WWE and professional wrestling history. And tonight he will say goodbye for one last time at WWE Survivor Series, the same pay-per-view event where he made his debut. Now that's what I call "coming full circle".
#GuyFawkesDay noir: Remember, remember, the fifth of November,
#Throwback noir: In honor of Halloween/All Hallow's Eve, one of my favorite holidays of the year, here is a self-portrait taken last Halloween 2019. I was wearing my mask at my beloved @SatchmiTeam cafe, holding my favorite affogato (salted caramel ice cream + espresso), without a care in the world. And, of course, I devoured my dessert without my mask on.
#Portrait noir: A few people have asked me why there are tears on my skull mask. They represent strength from vulnerability; they mean that there is nothing wrong with too much crying as long as we keep on fighting.
#Urban noir: In honor of #InternationalCoffeeDay, I had my favorite @SatchmiTeam iced latte to energize my mind and soul. ☕ Happy International Coffee Day, everyone!
#Batman noir: In light of #BatmanDay, here is one of my prized possessions: the Batman Black and White by Mike Mignola (@artofmm) (Hellboy creator) Statue. 🦇 Happy Batman Day, everyone!

All written pieces and graphics found on The Dispatch are intellectual properties of The Deranged Writer and associates unless stated otherwise.

The Punisher (as seen on the Marvel Netflix show “Daredevil”). Badass. The logo on his bulletproof vest is a nice touch.

The Undertaker (WWE). Of course I can’t miss out on a miniature version of my childhood hero.

Sorry about the empty space. NO. It’s John Cena (WWE). 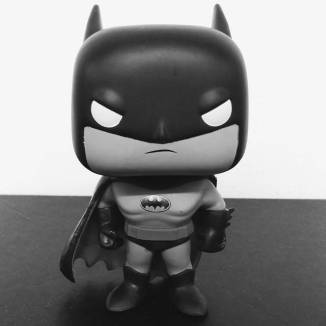 Batman, as seen on Batman: The Animated Series, my favorite animated show ever.

DC’s Earth One Batman. I love the paint job on this one.

One of the things I do in my free time is taking black and white photos (mostly) for my Instagram. And my regular subjects? My beloved Funko Pops! Here are some of what I took, and most of them are newly-bought (The Punisher and the two Batmen.

As you can tell, I have bought way too many Batmen. But nope. You’re wrong. There will never be enough Batmen.